A year ago, my morning commute would take me from Southwark (South London) to my campus on Strand (Central London). Cycling everyday by the Elephant and Castle roundabout, the Old Vic, and across the Waterloo bridge; my daily route quickly became rather dull.

That was until a new advert caught my eye at an Elephant and Castle bus stop. It was a picture of an astronaut in space, painting a planet, and accompanied by the words "NO GOD". There was just something about it. 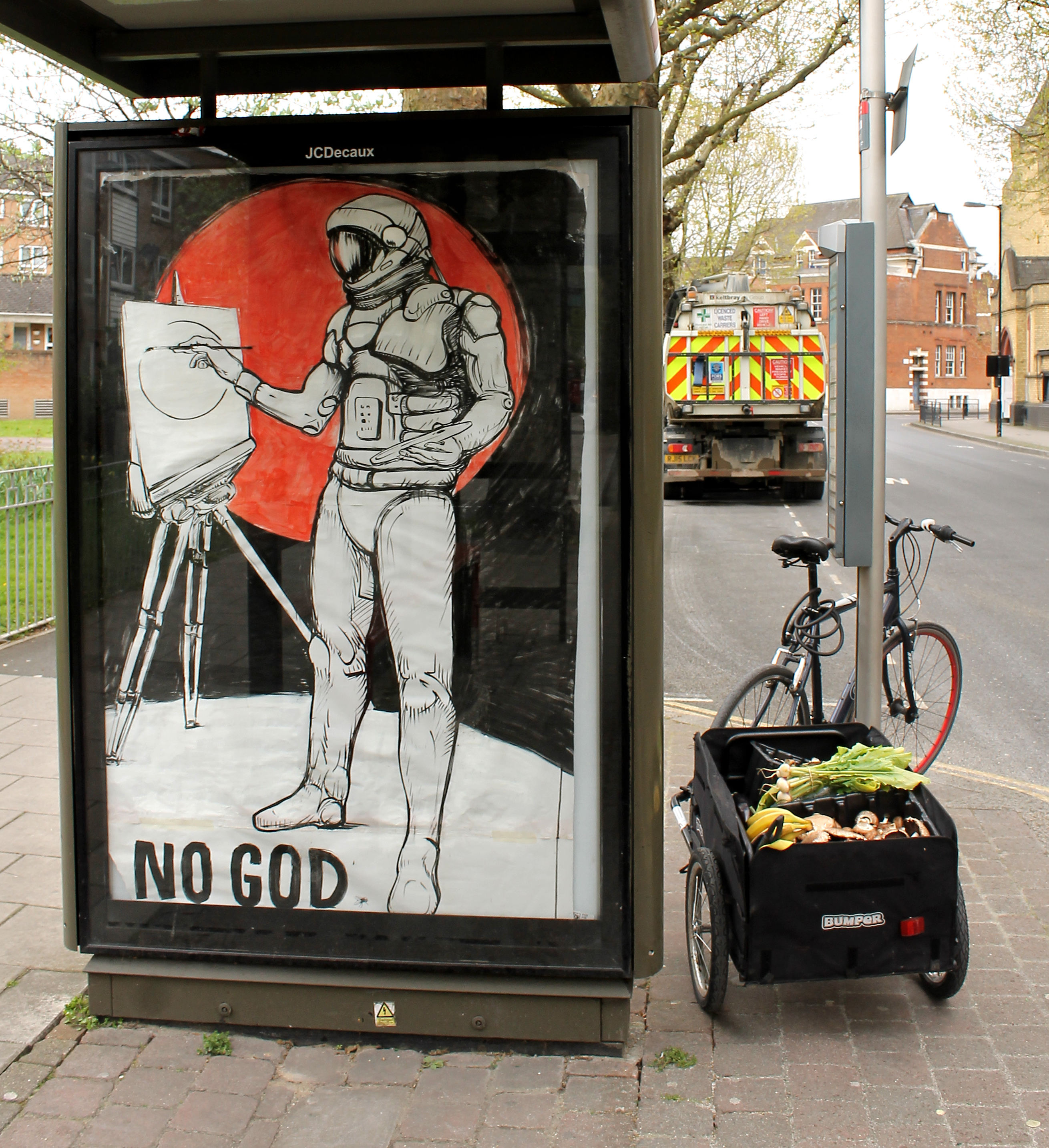 For starters, it looked way cooler than anything I had been used to when it comes to London advertising aesthetics. And most surprising, it didn't seem to advertise anything either.

This is how I got introduced to Hogre and his subvertising agency, who's speciality is to alter bus stop and billboard adverts across London.

Some will call him a street artist, but he prefers the term "subvertiser". On a mission to denounce the British capital's obsession with advertising, the anonymous anarchist has kept busy the past two years. 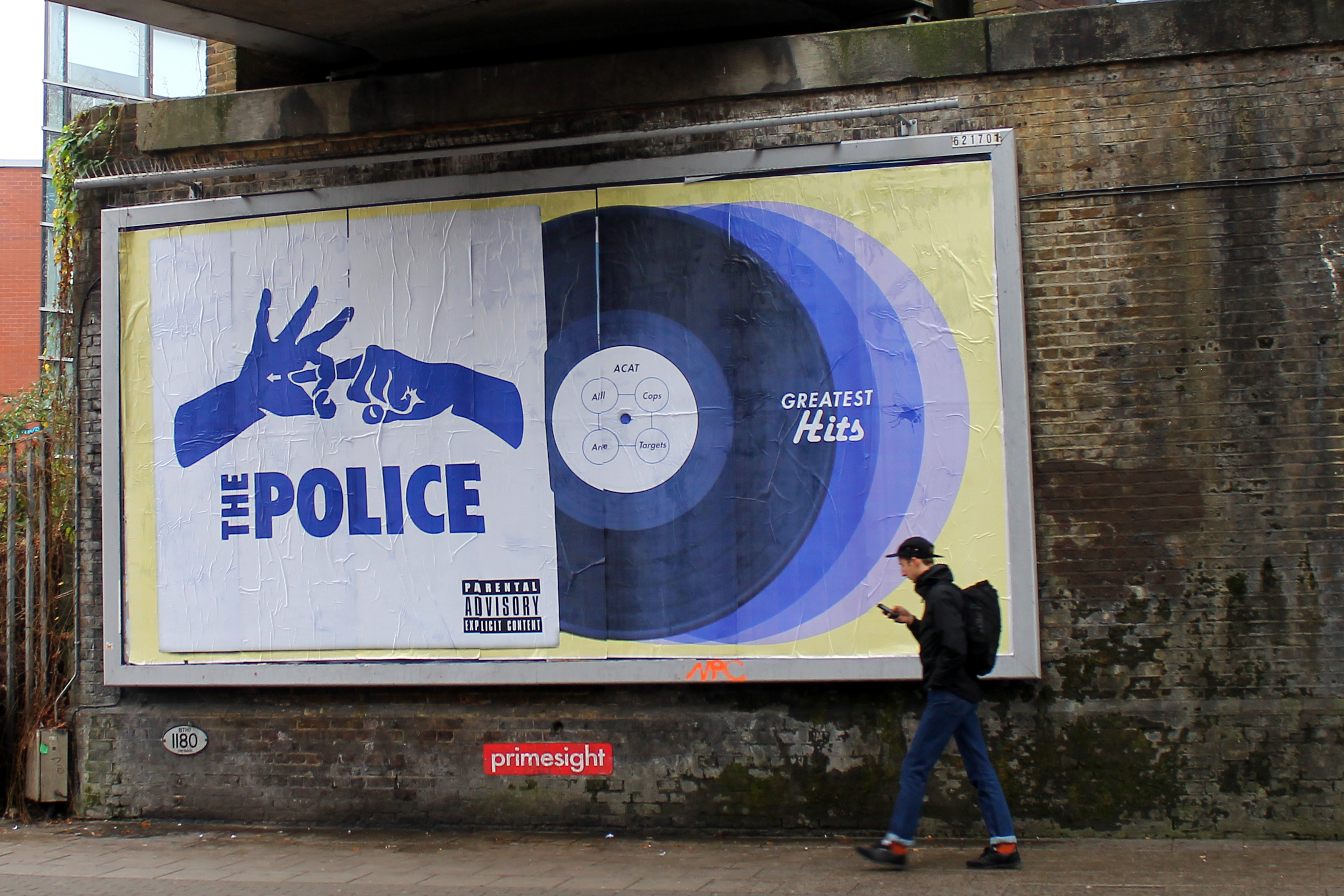 Now, Dog Section Press has released Subvertising: The Piracy of Outdoor Advertising, a book dedicated to Hogre's work and philosophy. It's the perfect opportunity for you to get acquainted with the mysterious artist, and who better than the man himself to talk about his work. Konbini reached out to Hogre, here's what he had to say:

How would you describe your work to someone who has yet seen your subvertised ads?

Hogre: After my death in 2015 I found HOGRE: a subvertising agency named as my alter ego. The agency consisting in a flexible number of agents that are professionals in the piracy of outdoor advertising. Our special solutions are creative vandalism and paranoia stimulation, both provided as public services. We also supply a new committed subvertising form known as SPUR: Satire on Power Upon Request ! For further informations or any consultancy,  you can write to our contact center: alienlog@hogre.it 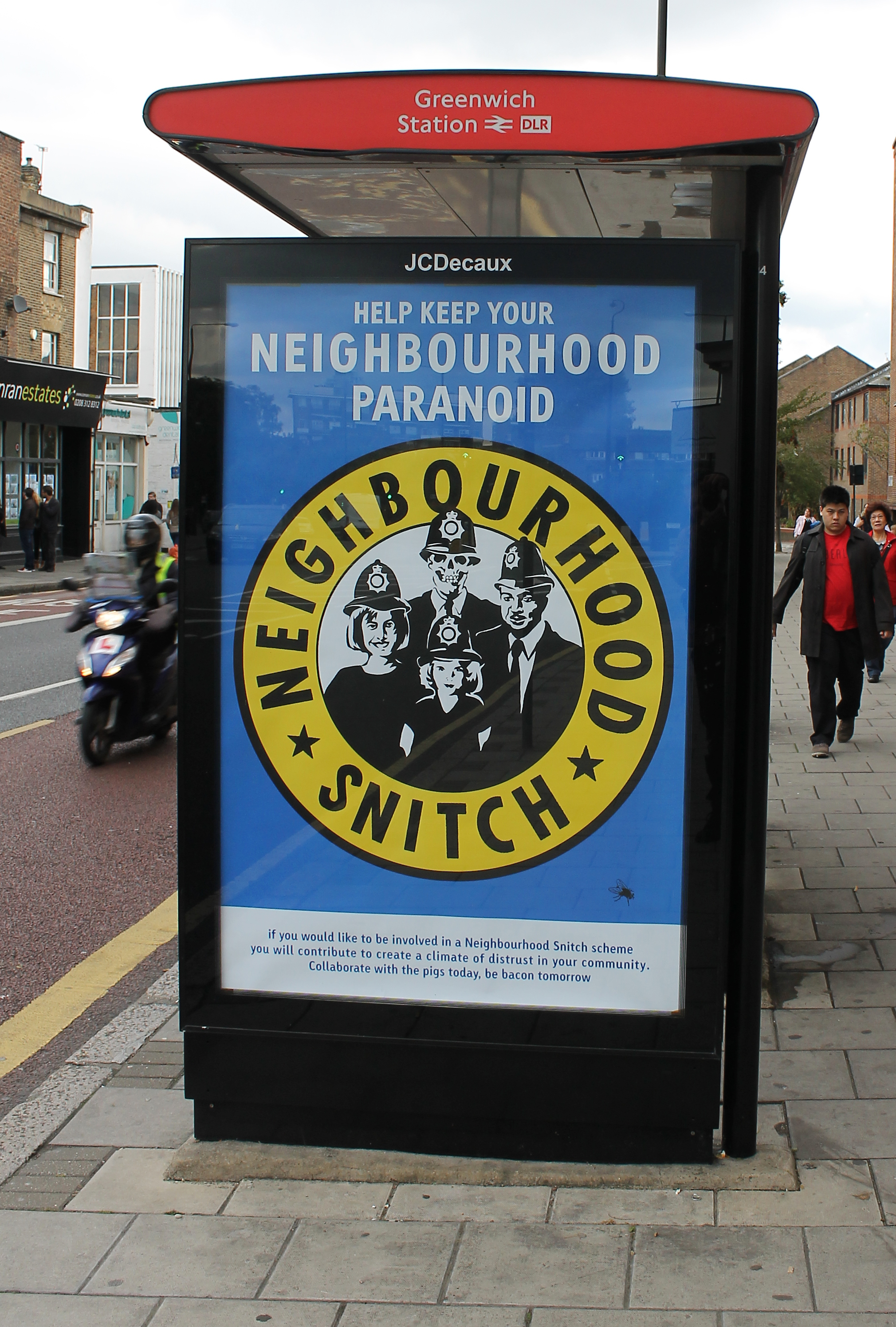 One of the first thing that struck me about your work is that you refer to yourself as a subvertiser. Is this a way to separate yourself from the rest of the street art scene?

Hogre: Yes, it is also, but what is still fundamental is the discussion about how we should manage public spaces. It is hypocritical to call our social organization “democracy” if the only public messages allowed are those ruled and mediated by personal profits. 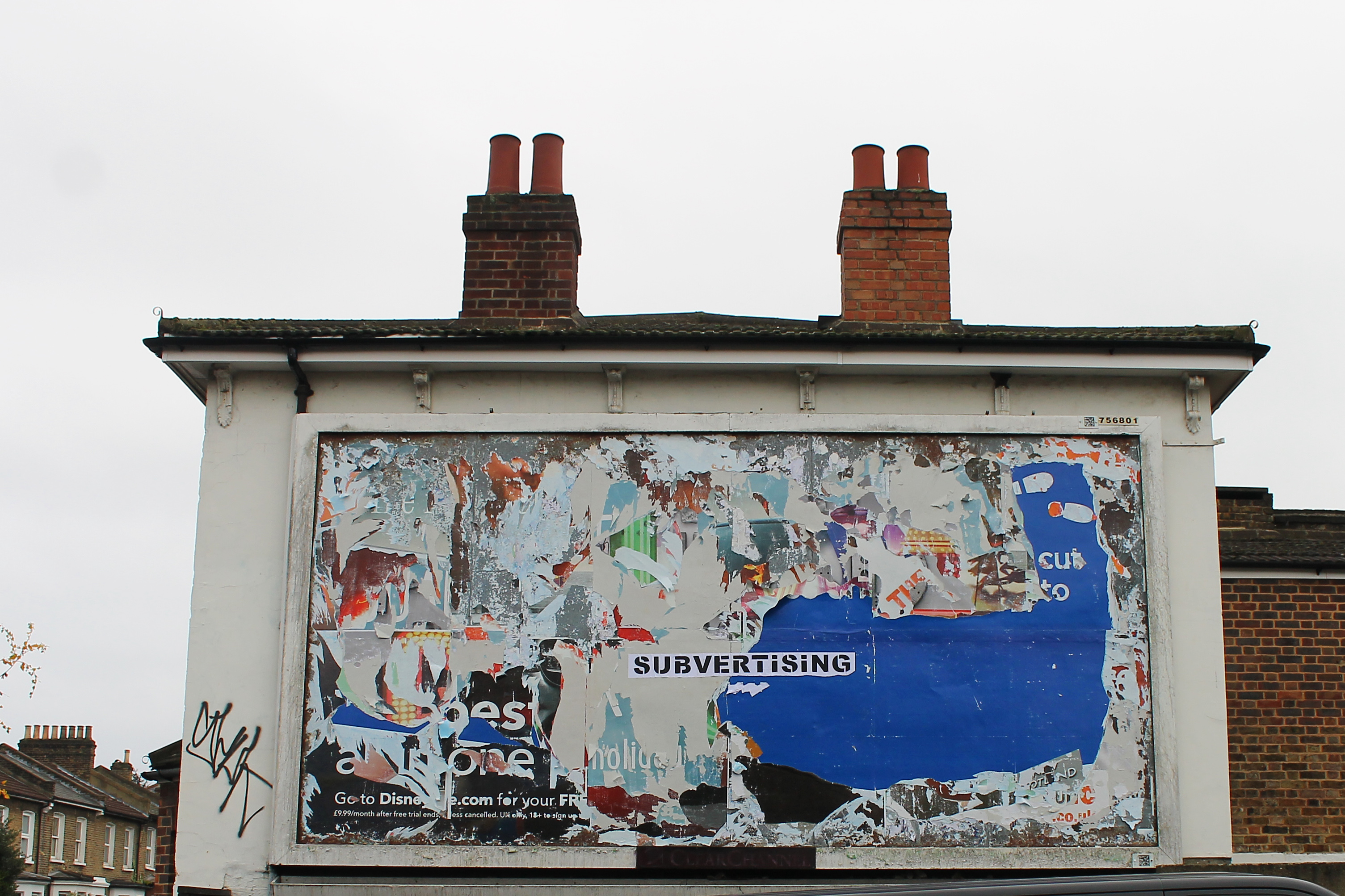 What is the creative process behind your installations? Do you spot an ad that annoys you and think of a way to alter it? Or do you rather start from an idea and try to find the ideal ad for it?

Hogre: There isn’t just one approach to satire. Rather than that, I like to experiment different styles, also not to provide a unique aesthetic. As a kid I started drawing moustaches, scars and shit over the pics of my dad’s newspapers. Now that my ass is bigger, I moved to more suitable kinds of toilet papers.

In your upcoming book Subvertising: The Piracy of Outdoor Advertising you mention you’re originally from Rome. So why London? What brought you here?

Hogre: I declared war to kitsch supremacy, embodied in the ads, and definable as the refusal of everything that is considered unacceptable. And London is the capital of this aesthetic ideal. 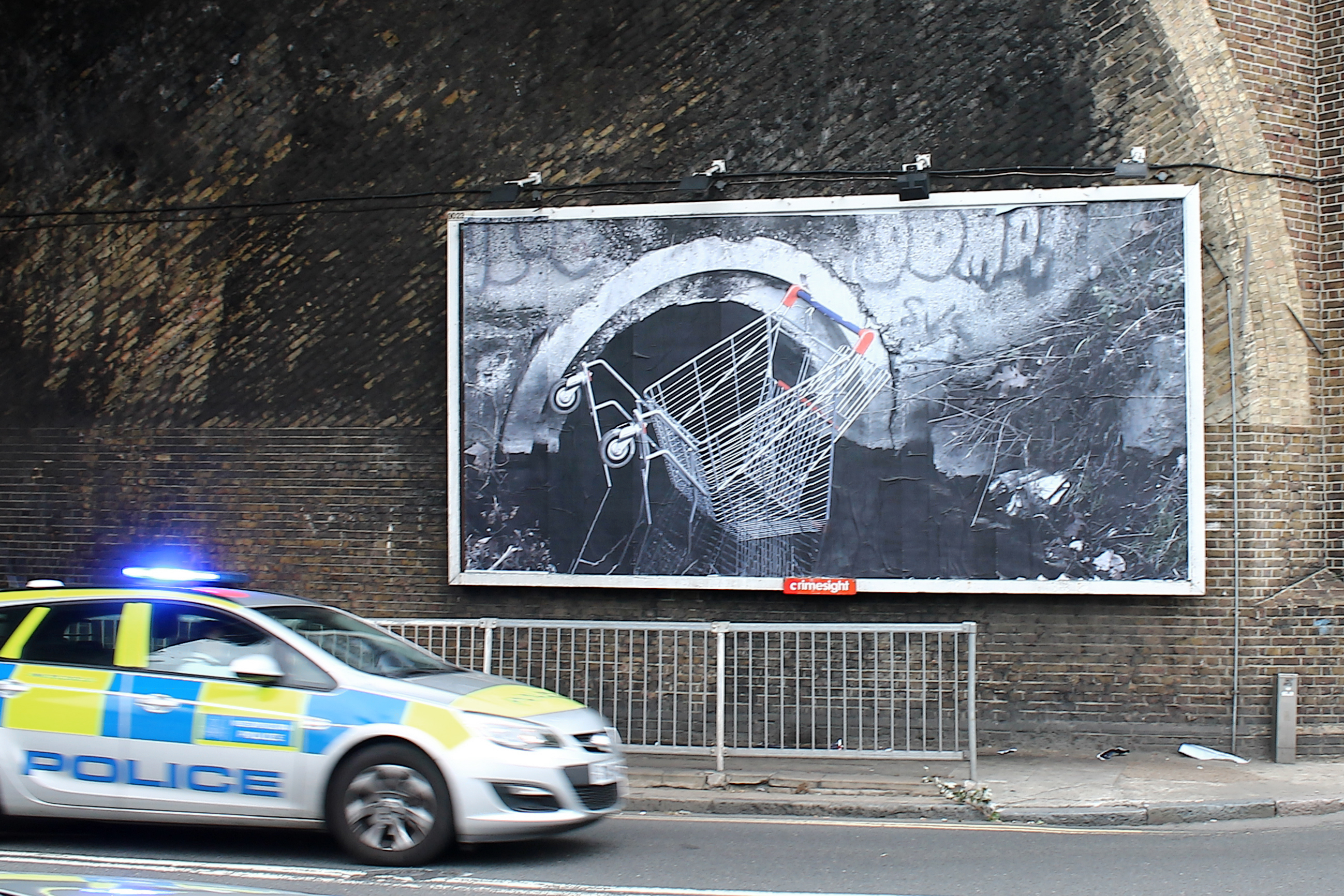 Your work is extremely political, targeting consumerism but also issues such as gentrification, the London housing crisis and even calling out King’s College London. What do you hope to achieve with your subvertised ads?

Hogre: How can Art not be political? Until it is accessible to a public how can it not talk to politics? Even when art seems to be not political: isn’t the refusal of every politics a political position in itself? What I hope to achieve with subvertising is to find right questions. 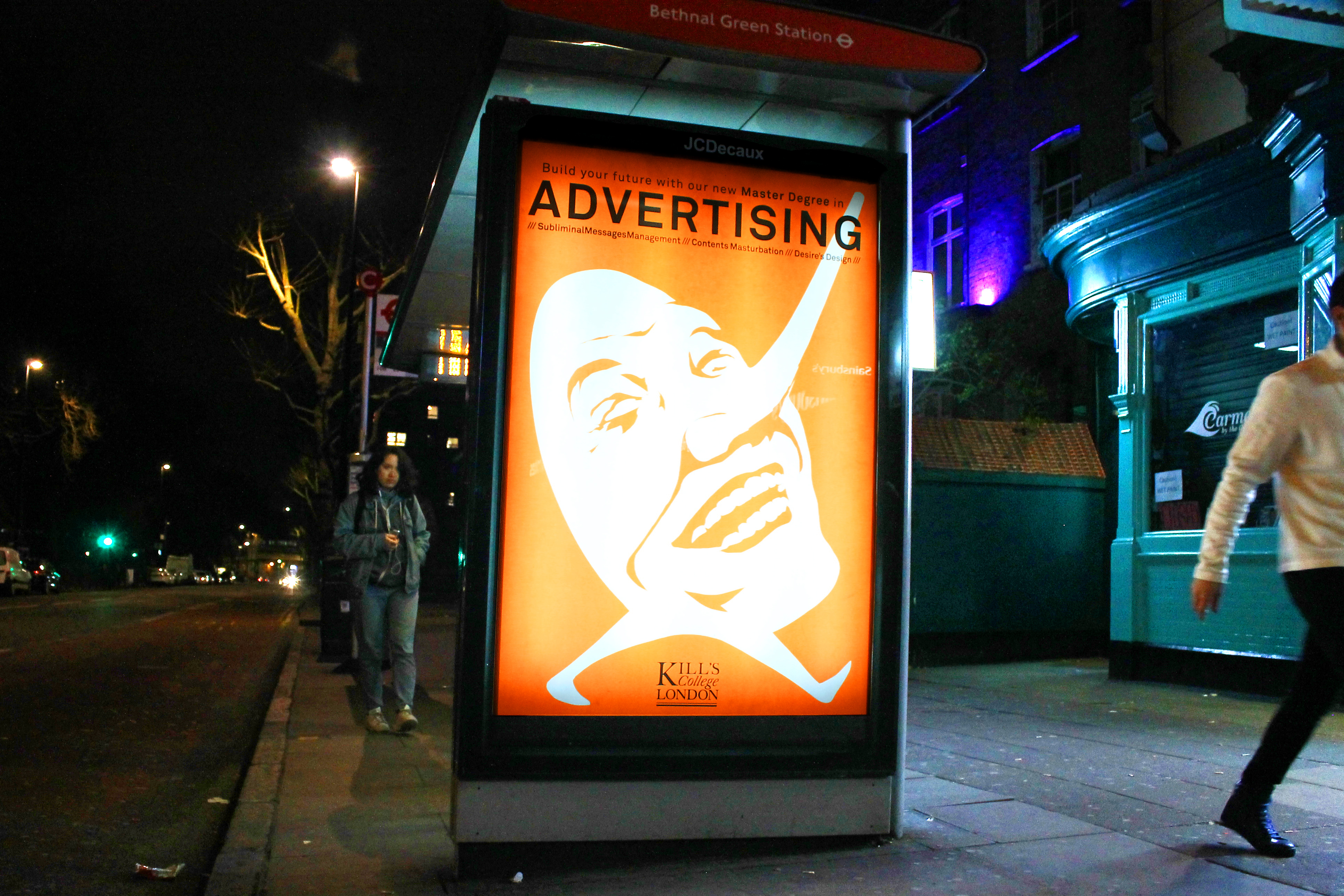 Do you have a personal favourite piece of yours?

Hogre: Not really, I try not to be attached to my artworks. Even because almost all of them end up destroyed by the outdoor ads maintenance. 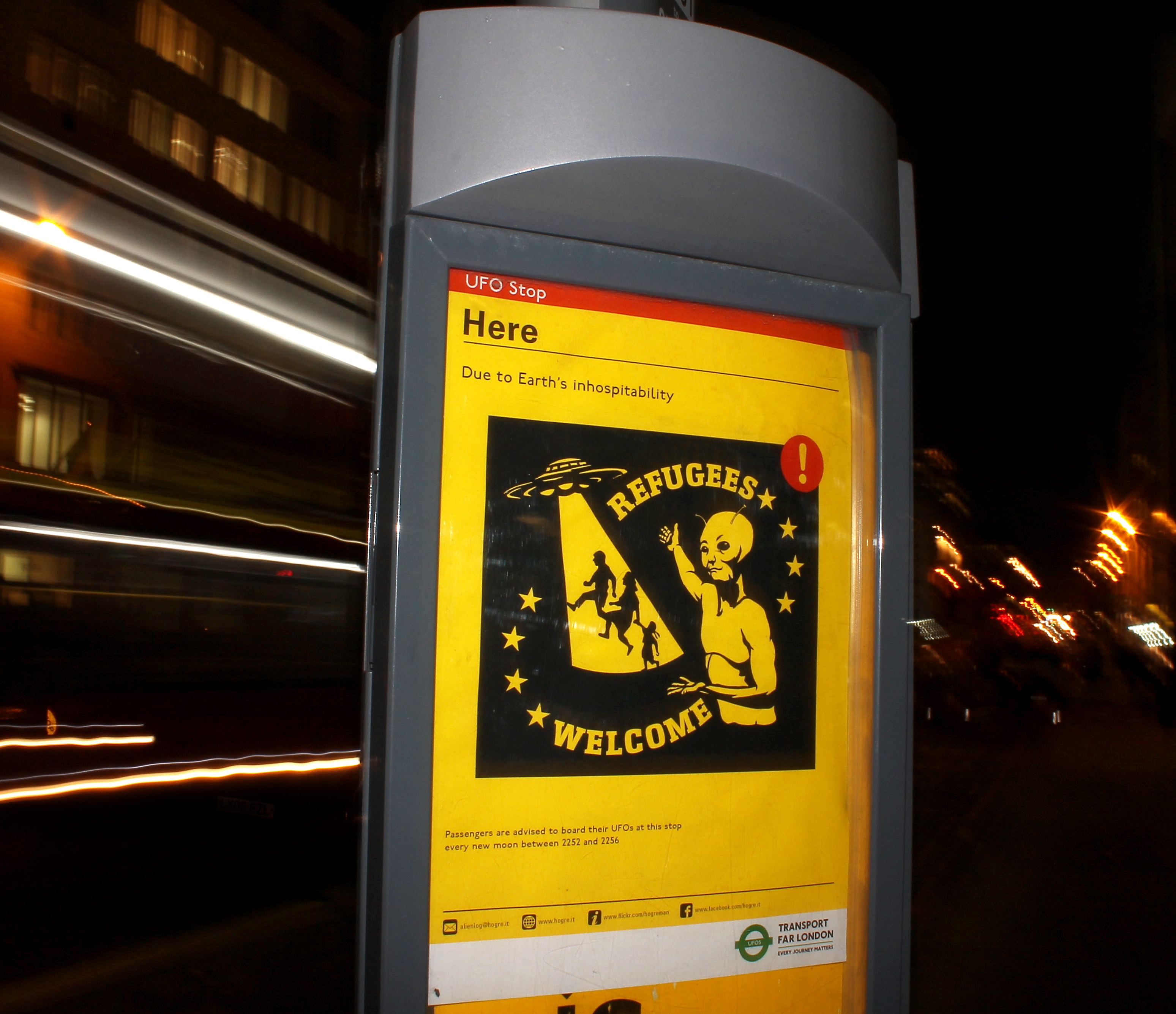 Your messages are sometimes hidden so well, blending in perfectly with the original ad, that some people probably don’t even notice it. Do you believe being subtle has a bigger impact than if it was “too obvious”?

Hogre: Being subtle is a basic prerogative for strong satire, in order to produce reflections after laughing. However, if we do not train in self-analyzing our desires the factory of images will keep playing with our subconsciousness. 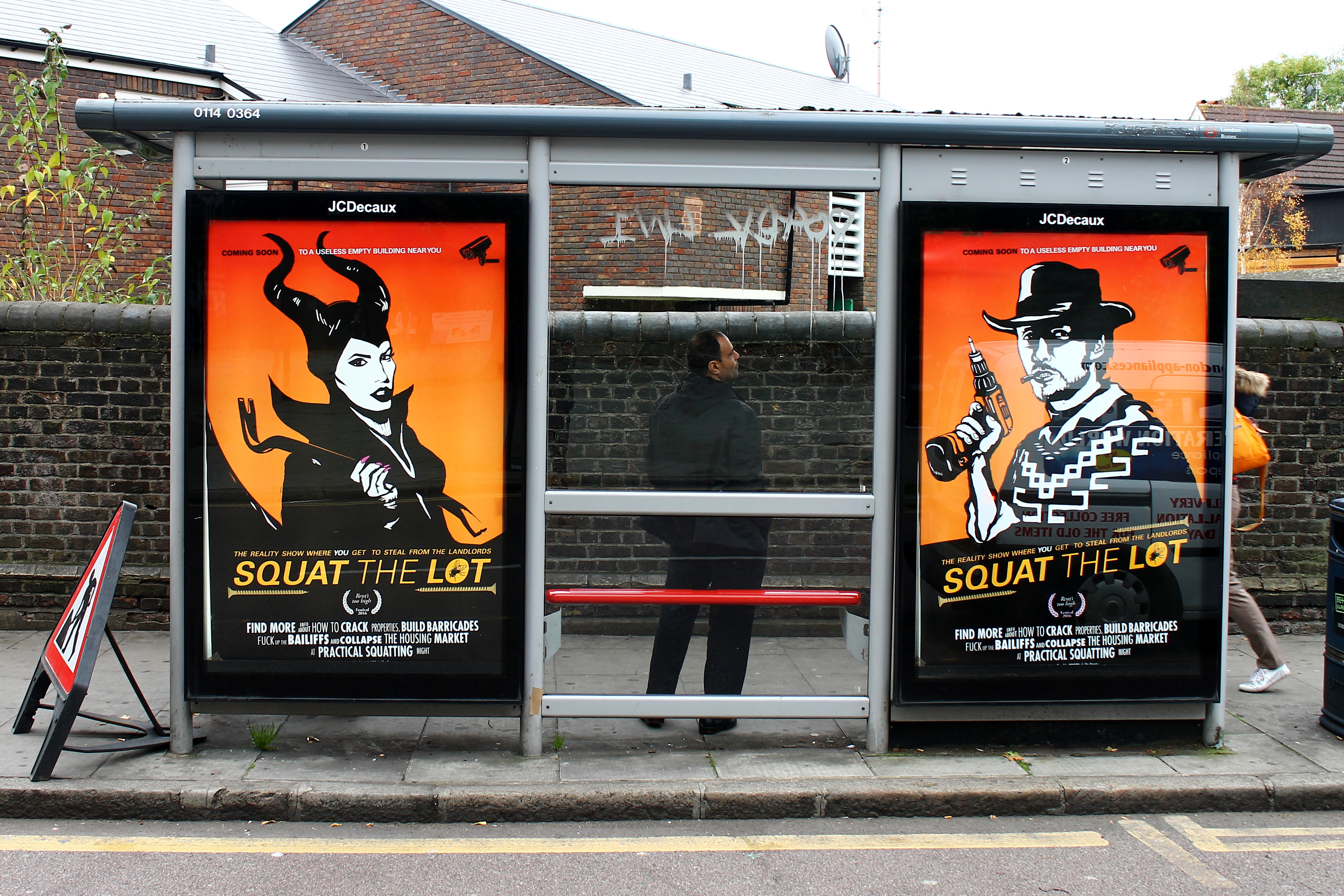 One of your most impressive piece was the “Social Cleansing” billboard near the Elephant and Castle roundabout. How long does it even take you to put up such a piece?

Hogre: That work was planned together with activists from radical housing action movements of south London. It is denouncing the housing politics of Southwark council and it refers in particular to the social cleansing operated in the estate of Aylesbury. We discuss the action for weeks, but it took us just 10 minutes to paste up that 6mx3m poster. It was removed straight away, but I think every satire can be judged by the reaction it causes: it was a good work indeed. 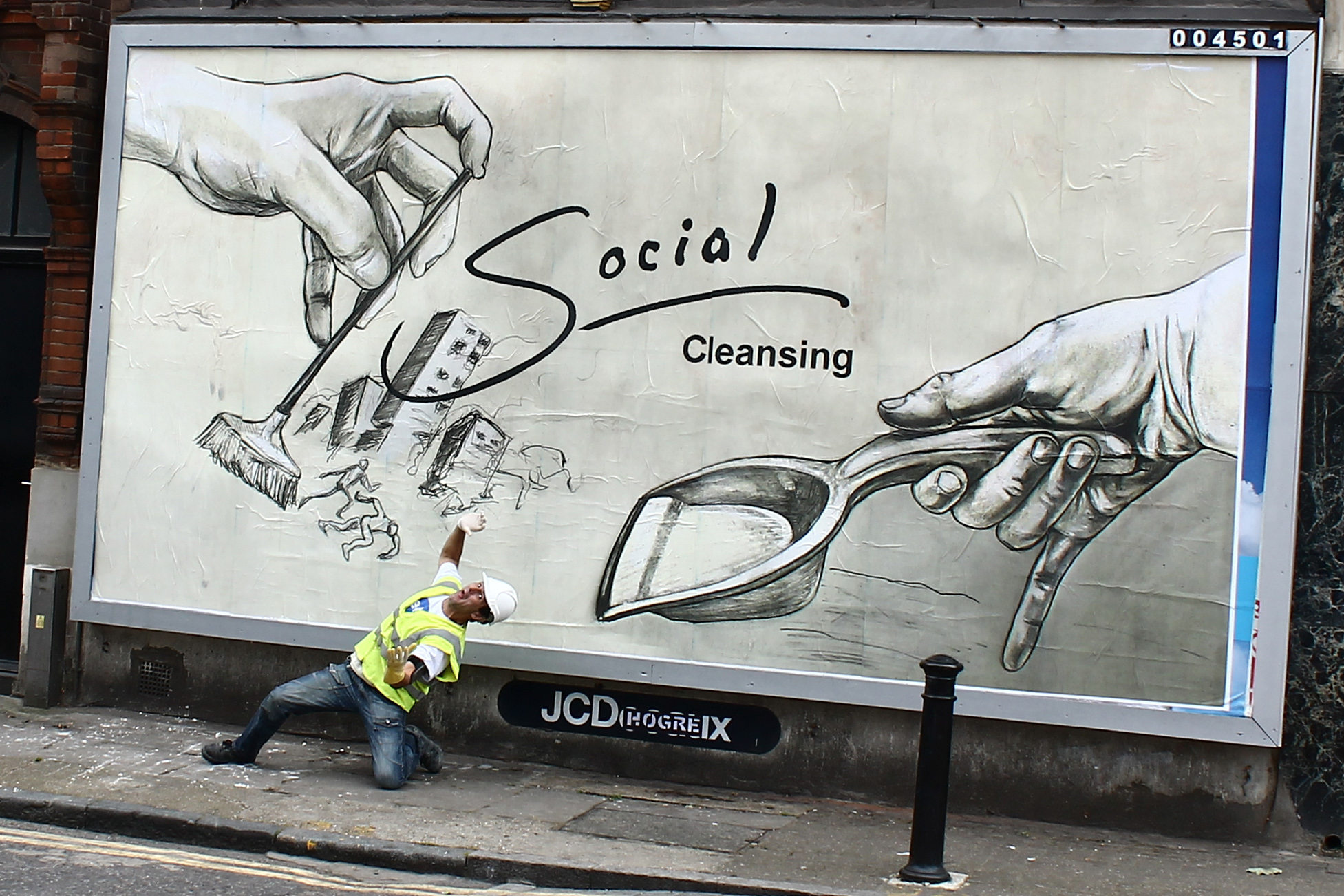 I understand the “Social Cleansing” billboard didn't last long, for obvious reasons. Can you recall which of your piece stayed on the longest without anyone taking it down?

Hogre: Last month some posters appeared in bus stops around Brixton. They seems to advert a contest to design the new version of the UK’s  Coat of Arms. Young designers were asked to send their own version of the royal logo through a website. Maybe thanks to the content that wasn’t very clear, those posters stayed up for almost two weeks. In reality the website reported on the poster is set by an anti-monarchy group of activists. Some extra contributions started to arrive and you can have a look at them by digiting www.contestroyalty.com 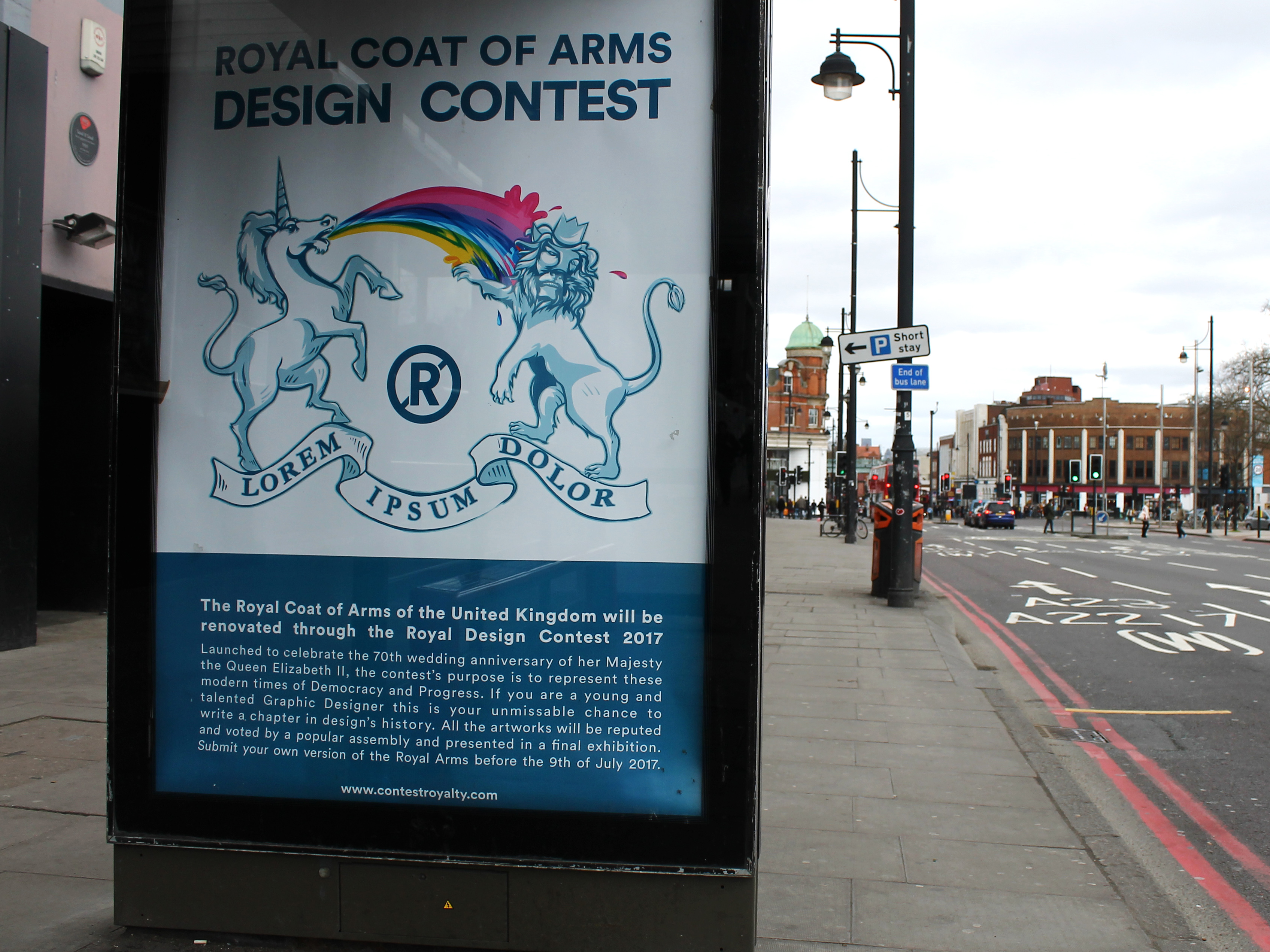 What do you think of the current state of street art? What about street artists that have reached a certain amount of exposure, leading them to move their art away from the streets and into private galleries?

Hogre: Getting money from selling artworks is for an artist today almost the only way to found new activities. There are artists that I like and others that I dislike: it depends on what they produce and why. It is impossible to generalize. 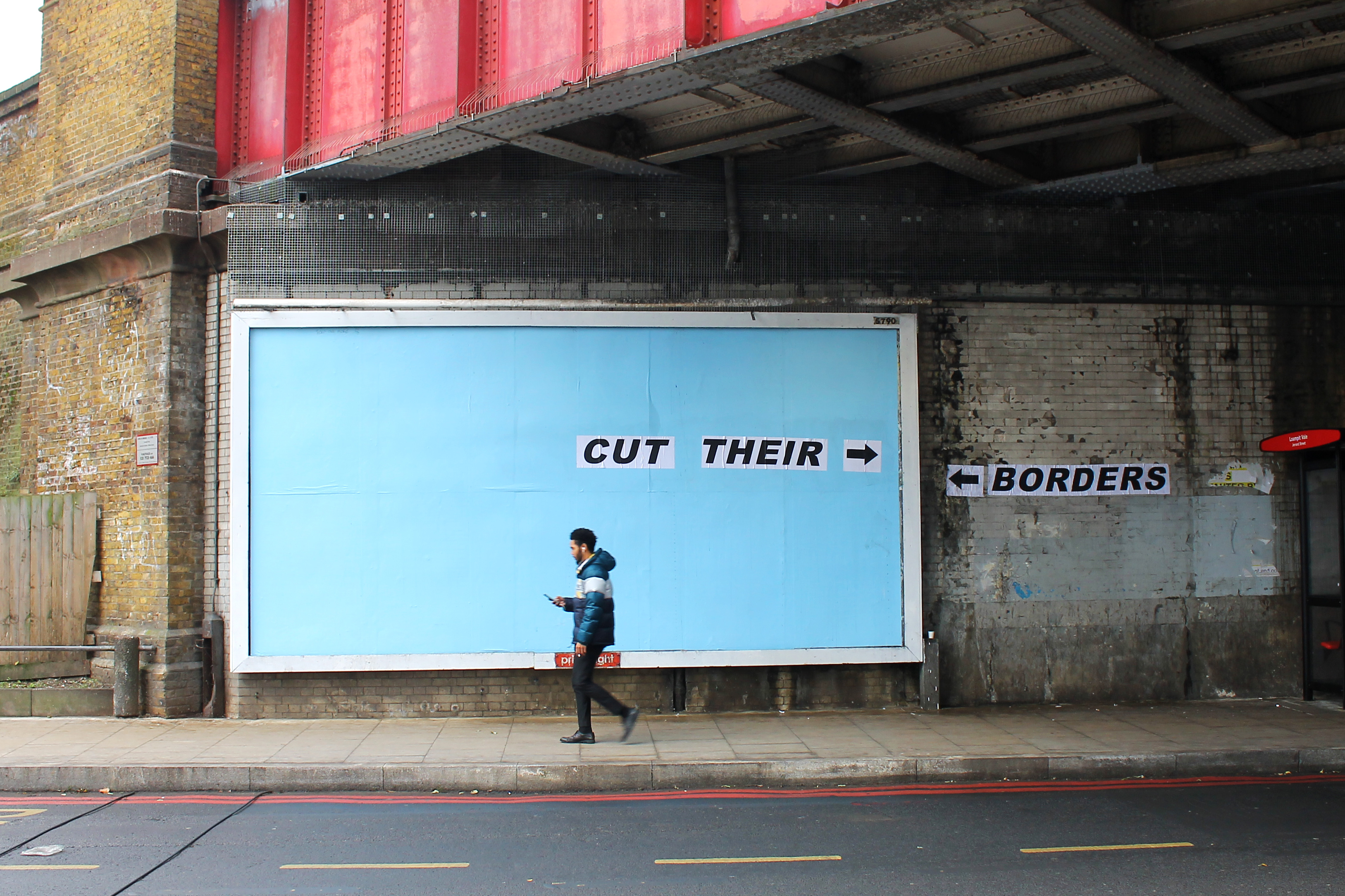 Do you have any memorable experiences from putting up these ads?

Hogre: I was with agent Kay Cameron, removing some ads inside of bus stops shelters during the day time. We were close to Borough market when one baby-girl approached us with her mum. She asked why we took off a poster that she really liked. We answered that if she wanted she could keep that piece of paper and do with it whatever she wanted. Can I put it up the wall in my room? The kid asked to her mum. The mum tried to persuade her daughter not to: In mum’s opinion the poster was too big (a bus stop sheet is about 120x180 cm), but the kid was insisting, so in the end the mum gave her consensus... It was a shiny and coloured advert, showing a new limited edition bottle of beer. 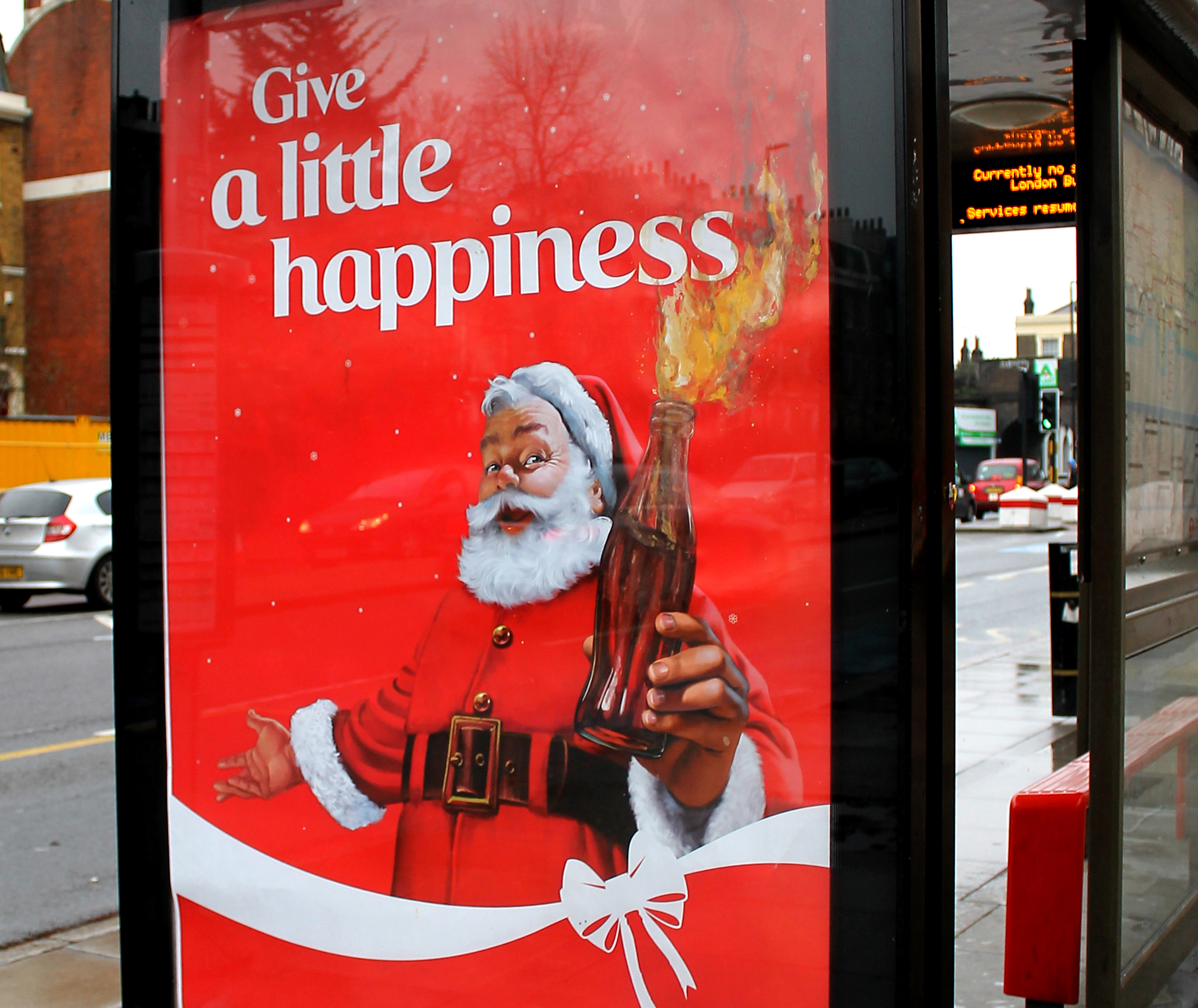 Anything you still haven’t done but wish you had? What’s next for Hogre?

Hogre: I would love to shit on the tomb of Goebbels and his legacy. 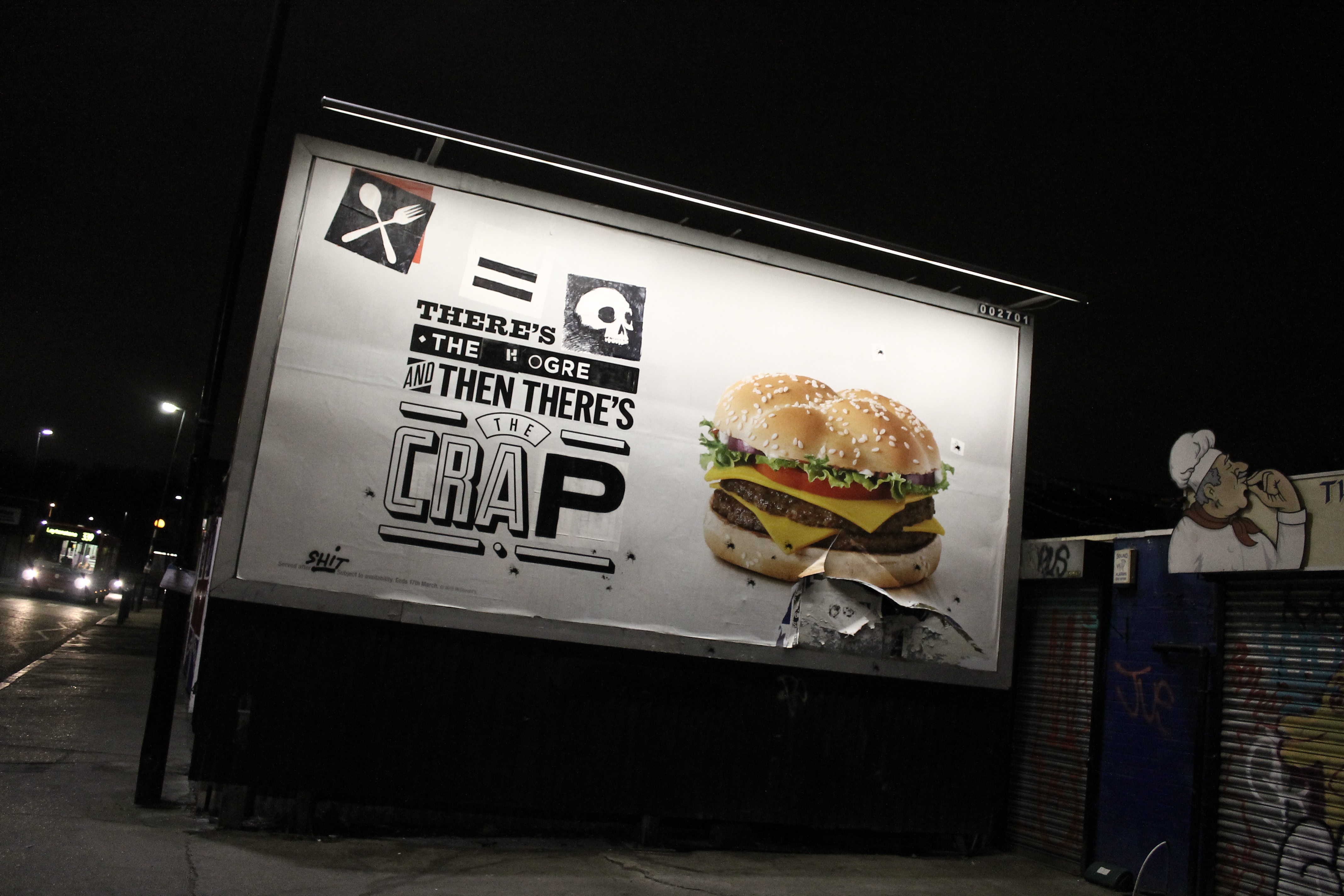 Grab your copy of Subvertising: The Piracy of Outdoor Advertising on Dog Section Press. As you would expect from the subertiser, it is available online for free.